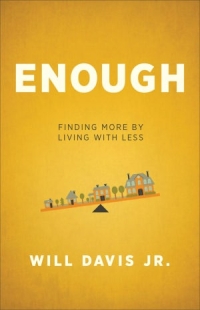 Will Davis Jr.’s new book, Enough: Finding More by Living with Less looked like a possibility for next semester’s “Theology and Consumerism” class – so I ordered it. It’s newly published and the author has a Doctorate in Ministry so my hope was that it would offer some new insights and critical thinking into poverty and consumerism.

But I was sadly disappointed and wrote the same in a BN review:

Unfortunately Davis holds the over privileged point of view that some people are “blessed by God” with more and others just happen to be poor. Not so and not very Christian. This book staunchly refuses to examine the systemic nature of poverty. People are not poor – people are MADE POOR by others and by unjust economic systems. When some have too much it is because they have profited from a system that benefits some at the expense of others. There is enough to go around. God does not make unfair economic systems, discrimination and food policies – people do. We, who hold too much, are morally and ethically culpable if we do not ask the underlying question, “What are the causes of poverty?” The answer is complex, but we detest even asking the question – because then we would see how we have unfairly profited from the unearned and inherited benefits of over privilege. I expected more from an educated Christian pastor claiming to look critically at our culture of consumption and consumerism. Certainly there is plenty out there to read about the systemic nature of poverty. This book is another example of moral poverty. Enough!

This author had the opportunity, the education and the resources to go deeper in examining the complex nature of poverty and why we should work to eliminate the disparity by living with enough. He made not even the briefest attempt to do this. For example, in describing his visit to communities south of the border he fails to ask how the agricultural subsidies of the U.S. and our dumping of produce into Mexico and Central America create a situation where these farmers can’t compete. Why didn’t he ask those living there? When he was at the grocery store there, did he not see where most of the produce was coming from? Where does he think all the processed foods in their grocery stores (think Kraft, General Foods, Nabisco, etc.) made with $90 billion in U.S., annually subsidized corn ingredients come from? Did he ask and listen to their understanding of poverty? If he did, he didn’t write about it in this book. But isn’t this the task of a pastor and educator? Isn’t this the task of Christian mission – to open ourselves to others and listen to their understanding of reality?

Going deeper to see why we have too much when others have nothing requires that we look at economic and political realities. There is enough to go around. Both poverty and privilege are caused by people – not by God. Further, we must work to change what is unfair and inhumane. For example, U.S. corporations should be required to pay fair wages – even when they manufacture in other countries – if they want to sell their products to U.S. consumers. U.S. farming subsidies that put farmers in other countries out of business, forcing them to migrate north looking for work, should be ended. We can support U.S. agribusiness in other – less damaging – ways. We can advocate for fair trade instead of “free” trade. It isn’t really free, in any case. Others pay for it with their poverty.

In the end – many of us in the U.S. have too much because our economic policies allow us to take/steal more than our share – often from the resources of poor countries – resources that don’t belong to us. But when, as Davis notes, someone like himself is an elite of the 1% (actually .6% as he readily acknowledges on p. 58) – he profits from unearned benefits in every aspect of his life and is clearly more than uninterested in learning why. Easier to chalk these unearned benefits up to “blessings from God.”

Contrary to Davis, I believe when we have too much we have an ethical and  moral imperative to ask tough questions. Those who have too much will be hard pressed to make it into the Kingdom, like the camel through the eye of the needle, because we are morally culpable for refusing to look more deeply into reality and seeing things as they really are. Why don’t we take a close look? Because we like our unearned privileges and benefits!

“It is difficult to get a man to understand something, when his salary depends on not understanding it.” Upton Sinclair.

For those who are really interested in learning more about living with enough and the systemic nature of poverty caused by privilege, purchase one of these books: Mark Kramer’s Dispossessed, Mary Elsbernd’s When Love is Not Enough, The World Without Us by Alan Weisman  or Sacred Economics by Charles Eisenstein. You won’t be disappointed. Learn more about how we create and sustain both poverty for most and too much for some.

You may also like What is White Privilege?, The Empire of Tea and Are Women Human?

How to Break Into a Cemetery