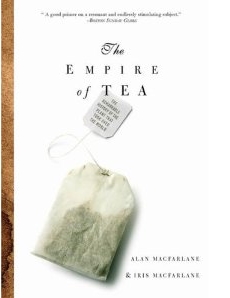 Summer is often about warm afternoons on the patio or deck with good book; lazy days of reading. Here’s a book suggestion. My friend J gave me a truly interesting little book entitled, The Empire of Tea: The Remarkable History of the Plant that Took Over the World, by Alan MacFarlane and his mother, Iris MacFarlane.

Both authors are British and have had their lives caught up in the tea gardens (plantations) of Assam. Iris shares a particularly poignant and personal memoir of her experience living on an Assamese tea plantation in the 1950’s and 60’s. She shares her memories through the eyes of privilege — but now wisened to realize how privilege blinded her to the harsh realities around her. Thus the story begins.

From here Alan MacFarlane enlightens us on the history of tea drinking and its impact on both Western and Eastern civilizations. The impact of this one drink has been profound indeed. From allowing a burgeoning population to escape deadly epidemics in the 1700s because tea required boiled or sterilized water, to the elegant and spiritual tea cermonies that were created in Japan, tea helped to shape cultures and dynasties.

While the authors note the slave-like conditions of the workers who harvest and process tea, they fail to note that these conditions continue to exist today, not only in Assam but now elsewhere in the world – all so that we can have the tea we crave and have it at an inhumane cost. Further, international law requires that poor countries sell their unprocessed tea cheaply to industrialized countries. This means they must then repurchase their own tea now processed and packaged and marked up hundreds of times over. They are not allowed the profits from their own product. This is the system of injustice that is designed and enforced for tea, but also for coffee and most commodities. This is how poor countries are made poor and kept poor by rich countries.

Its not clear if the authors are simply not aware of this, or perhaps their own privilege prevents them from plainly stating the slavery that is inherent in our consumption of this beverage.

Nevertheless, the book is well written and engaging. Once you have read it, you will never sip a cup of tea the same way again.

You may also like The Particular Sadness of Lemon Cake and A Fine Balance.

How to Break Into a Cemetery