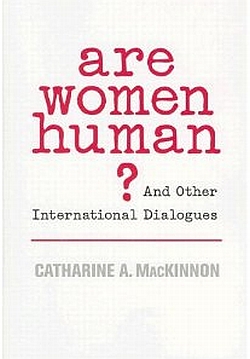 She writes of the necessity to define women’s rights and the systemic denial of them:

Regarding the Inter-American Convention on the Prevention, Punishment and Eradication of Violence Against Women (Convention of Belém do Pará) she explains it explicitly states that women have “The right to freedom from violence notably includes ‘the right of women to be valued and educated free of stereotyped patterns of behavior and social and cultural practices based on concepts of inferiority or subordination’ (9).

Further, “Women are half the human race. To put the individual accounts in context, all around the world, women are battered, raped, sexually abused as children, prostituted, and increasingly live pornographic lives in contexts saturated more or less with pornography. Women do two-thirds of the world’s work, earn one-tenth of the world’s income, and own less than one-hundredth of the world’s property. Women are more likely to be property than to own any. Women have not even been allowed to vote until very recently and still are not in some countries” (21, italics, author’s, stats from United Nations, The State of the World’s Women 1979 quoted in Burns H. Weston, Richard A. Falk and Anthony A. D’Amato, International Law and World Order 578-580 (1980) footnote 12, p 291).

She observes that the violence against women is a war and we need to recognize it as such.

“ To be on the bottom of a hierarchy is certainly different from being on the top of one, but it is not simply difference that distinguishes the two. It is, in fact, the lesser access to resources, privileges, credibility, legitimacy, authority, pay, bodily integrity, security, and power that makes the two unequal. The issue here is not entirely how to make access to those things nonarbitrary, because the situation we are confronting is anything but simply arbitrary. It does have an inner logic. The issue is systematic male supremacy and how to end it.” (74).

Women have the power to demand and make systemic change.

“The idea that these acts violate women’s human rights has been created by women, not by states or governments. National laws seldom effectively recognize that women are violated in these ways and sometimes even make them criminals for being raped (having sex outside marriage) or having abortions (resisting forced motherhood). Women across cultures have created the idea that women have human rights, refusing to believe that the reality of violation we live with is what it means for us to be human – as our governments seem largely to believe.” (181).

“Women have created the idea of women’s human rights by refusing to abandon ourselves and one another, out of attachment to a principle of our own humanity –  one defined against our context and our experiences.” (181).

Are women human? Not according to state, national and international laws that allow ongoing violence to women around the globe. Not as evidenced by the systemic abuses against women perpetrated by educational, religious, social, cultural, corporate and governmental institutions run primarily by men.

But we can and will change that. We are half the world.

You may also like New Books, and A Fine Balance.