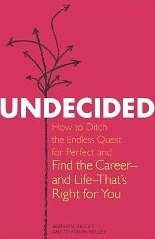 Part of my summer reading included a few books that looked promising from my local library’s “newly published” shelf. Undecided: How to Ditch the Endless Quest for Perfect and Find the Career – and Life – That’s Right for You by Barbara Kelley and Shannon Kelley (Seal Press: 2011) looked at the inability of millennium women to decide on a career. I thought it would be interesting to see what challenges and struggles face women of the next generation. The authors did a fair job of demonstrating the challenges and ambivalence facing young women who were raised to believe they could whatever they wanted to do. They used personal stories and some demographic statistics to make their point.

However, a large portion of the book explains the ongoing dilemma for women: how to work in jobs that pay less than men – so less money – while trying to raise a family. This is not a choice that men ever make, because as the authors spend time explaining, the business world assumes that men have a wife at home full time to take care of children and women will leave either to get married (if single) or to have children (if married), so pay them less for the same work (190-192). The fact neither assumption is any longer the case in today’s world is lost on corporate America. These are systemic issues that need to be addressed. The authors are clear that personalizing this issue will not solve the problem (182-183).

Further, they noted that in some countries, such as Sweden, these issues have been addresses systemically. Laws have been changed to require both men and women to take leave to care for infants or family members. The authors observed that this has narrowed the pay differential between men and women in Sweden significantly in just ten years (200-201).

But then these authors fall out of bed. Rather than provide ways that women can work to legislate similar laws in this country – they do exactly what they previously said will not work – they personalize this issue. Chapters thirteen and fourteen discuss how women should just turn inward, learn what they are really passionate about and all these problems will somehow be solved. They use the same individual stories from earlier in the book to demonstrate how it will work.

This is magical thinking at it’s worst (or best depending on your POV). Turning inward and learning more about ourselves can be helpful – but unfortunately it will not eliminate the inherent structural issues that women face – being paid less for the same work and society not valuing the work required to care for society’s children. This is the kind of thinking that must change. Unlike the authors hopeless suggestion to turn inward, women and men must see the ugly discrimination built into the system as it really is. Then it can be changed. Women must demand systemic change from men, and both can look to successful models (elements of Sweden for example) for ways to make things different.

So – I’m undecided about this book. It does help the reader see the dilemmas facing millennium women. But neither author understands the systemic changes necessary to solve the dilemma brought about by the discrimination of men against women.