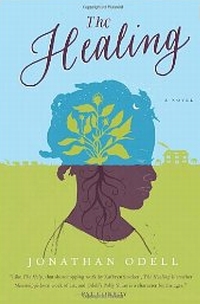 If you liked the story The Help, you’ll enjoy The Healing. It’s a great novel for summer reading from Jonathan Odell, a Minnesota author. Beautifully written, the reader is instantly transported into a plantation in the Deep South.

Rich in mood and atmosphere, The Healing is a warmhearted novel about the unbreakable bonds between three generations of female healers and their power to restore the body, the spirit, and the soul.

In Antebellum Mississippi, Granada Satterfield has the mixed fortune to be born on the same day that her plantation mistress’s daughter, Becky, dies of cholera. Believing that the newborn possesses some of her daughter’s spirit, the Mistress Amanda adopts Granada, dolling her up in Becky’s dresses and giving her a special place in the family despite her husband’s protests. But when The Master brings a woman named Polly Shine to help quell the debilitating plague that is sweeping through the slave quarters, Granada’s life changes. For Polly sees something in the young girl, a spark of “The Healing,” and a domestic battle of wills begins, one that will bring the two closer but that will ultimately lead to a great tragedy. And seventy-five years later, Granada, still living on the abandoned plantation long after slavery ended, must revive the buried memories before history repeats itself.

Inspirational and suspenseful, The Healing is the kind of historical fiction readers can’t put down—and can’t wait to recommend once they’ve finished.

“A remarkable rite-of-passage novel with an unforgettable character. . . . The Healing transcends any clichés of the genre with its captivating, at times almost lyrical, prose; its firm grasp of history; vivid scenes; and vital, fully realized people, particularly the slaves with their many shades of color and modes of survival.” The Associated Press

But in the end, one of the characters, wasn’t able to envision freedom. Caught in the culture (in the story it was a culture of the plantation life) creates blinders that prevent us from accepting the invitation for a new life when it is offered.

This story alerts us to the fact that merely changing the laws on slavery doesn’t create free people. In the same way enacting a law requiring affirmative action doesn’t eliminate descriminatory behavior – it just takes on more subtle forms.

Like the characters in the story, in our own lives we are often caught in the same way. We are invited, either by a new situation or by someone we know to embark on something new, to leave what we know. Because we can imagine something worse, but not something better, we refuse. We are too caught up in our own story – which we believe is true. It is our failure to imagine something better that holds us back – a failure of imagination. God exists, however, in our imagination – or God doesn’t exist at all. Our imagination is the only place God can exist because we can’t see, hear, feel or touch God.

God is not safe. Through our imagination, God is constantly inviting us to stretch, to become uncomfortable, to step out of our comfort zones. But we want so much to be comfortable, to have health insurance, to stay in a space that no longer serves our needs or our life. We are complacent and we want to stay that way. However, this is not living, this is not a life.