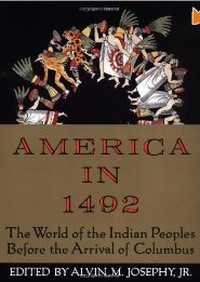 We were often led to believe that this land was simply vast and empty – a big wasteland – waiting to be “settled.” But this isn’t even remotely true.

Alvin Josephy Jr. has compiled information about our continent from the best authorities in this area in his book America in 1492: The World of the Indian Peoples Before the Arrival of Columbus.

Publishers’ Weekly writes this about the book America in 1492,

In a concerted effort to quash myths and stereotypes, Josephy assembles essays by noted writers and scholars that depict Native American culture at the time of Columbus’s first voyage to the Americas.

From the inside cover,

When Columbus landed in 1492, the New World was far from being a vast expanse of empty wilderness: it was home to some seventy-five million people. They ranged from the Arctic to Tierra del Fuego, spoke as many as two thousand different languages, and lived in groups that varied from small bands of hunter-gatherers to the sophisticated and dazzling empires of the Incas and Aztecs. This brilliantly detailed and documented volume brings together essays by fifteen leading scholars field to present a comprehensive and richly evocative portrait of Native American life on the eve of Columbus’s first landfall.

Developed at the D’Arcy McNickle Center for the History of the American Indian and edited by award-winning author Alvin M. Josephy, Jr., America in 1492 is an invaluable work that combines the insights of historians, anthropologists, and students of art, religion, and folklore. Its dozens of illustrations, drawn from largely from the rare books and manuscripts housed at the Newberry Library, open a window on worlds flourished in the Americas five hundred years ago.

From the back cover,

“A teeming panorama of North and South American life from prehistoric times through the 15th century …. A book like [this]needs no recommendation beyond its accuracy, comprehensiveness, and serious of purpose.” — Cleveland Plain Dealer

“America in 1492 totally shatters the pious fiction that there was no civilization here before the arrival of Columbus.” — Dee Brown

Both continents were filled with many nations, advanced cultures, languages, and even national federations for thousands of years prior to the invasion of Europeans. The genocide committed by conquering Europeans, largely destroyed existing peoples. Today First Nation decendents continue to be the victims of racism and are made to live in poverty in the U.S. as the result of current U.S. policies and laws that denigrate those of First Nation decent.

We are forced to pause and ask ourselves, “Who were the savages?”

Without acknowledgement of wrong doing there can never be forgiveness. Without justice there can never true reconciliation. Justice requires the correcting of racist laws and policies and the return of stolen lands and wealth – or restitution.

This book was an eye-opener for me. Learn about the amazing history of the land we are living on. New scholarship details an ancient and fascinating history that extends back thousands of years.

The true history of the people already here in 1492 compels us to realize that we live the lifestyle we have, in part, due to ill-gotten land and wealth stolen from these First Nations. Our own United States is founded on the genocide of millions. We need to acknowledge this. This is the first step. This is the beginning of justice.

You may also like What is White Privilege? and Prisons for Profit.