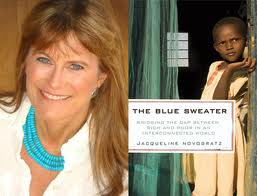 Two thirds of the world’s population live on $2 per day or less. The world’s poor are mainly women and children. Capitalism alone can’t solve global poverty. This is because capitalism can’t provide equal access to resources and markets.

So what can we do? We can listen and learn from local people with local wisdom. Like Mary’s Pence ESPERA Funds, Jacqueline Novogratz – a previous financial executive – has a better idea about what we can do. Listen to her here on TED Talks.

She has a number of TED talks dating from 2006. Most are 10 minutes or less and worth listening to.

“Why you should listen to her:

One of the most innovative players shaping philanthropy today, Jacqueline Novogratz is redefining the way problems of poverty can be solved around the world. Drawing on her past experience in banking, microfinance and traditional philanthropy, Novogratz has become a leading proponent for financing entrepreneurs and enterprises that can bring affordable clean water, housing and healthcare to poor people so that they no longer have to depend on the disappointing results and lack of accountability seen in traditional charity and old-fashioned aid.

The Acumen Fund, which she founded in 2001, has an ambitious plan: to create a blueprint for alleviating poverty using market-oriented approaches. Indeed, Acumen has more in common with a venture capital fund than a typical nonprofit. Rather than handing out grants, Acumen invests in fledgling companies and organizations that bring critical — often life-altering — products and services to the world’s poor. Like VCs, Acumen offers not just money, but also infrastructure and management expertise. From drip-irrigation systems in India to malaria-preventing bed nets in Tanzania to a low-cost mortgage program in Pakistan, Acumen’s portfolio offers important case studies for entrepreneurial efforts aimed at the vastly underserved market of those making less than $4/day.

It’s a fascinating model that’s shaken up philanthropy and investment communities alike. Acumen Fund manages more than $20 million in investments aimed at serving the poor. And most of their projects deliver stunning, inspiring results. Their success can be traced back to Novogratz herself, who possesses that rarest combination of business savvy and cultural sensitivity. In addition to seeking out sound business models, she places great importance on identifying solutions from within communities rather than imposing them from the outside. ‘People don’t want handouts,’ Novogratz said at TEDGlobal 2005. ‘They want to make their own decisions, to solve their own problems.’

In her book, The Blue Sweater, she tells stories from the new philanthropy, which emphasizes sustainable bottom-up solutions over traditional top-down aid.” – TED Talks.

You may also like Does Everyone Have a Voice? and What Can You and I Do?